Here’s a list of the Nexus 2000 Series switch FEX technology topics covered in this article:

Are you a Network Administrator, System Engineer, Software Engineer, Indeni Knowledge Expert (IKEs), Indeni Software Developers or Tech Geek? If yes, then read on! This article is for you!

20 Gbps in each direction

40 Gbps in each direction

40 Gbps in each direction

80 Gbps in each direction

80 Gbps in each direction

160 Gbps in each direction

160 Gbps in each direction

Enterprises need to simplify their data center implementation, reduce operational complexity, increase scalability and flexibility, and simplify management. The Cisco Nexus 2k series switches and the fabric extender technology are a highly scalable unified solution that meets all these requirements.

Let’s have a quick overview of the NX-OS FEX technology and Nexus 2k series switches which are widely deployed from small to large scale Data Centers.

✓ Offers a broad range of connectivity options, including 100 Mbps, 1, 10, and 40 Gigabit Ethernet, copper and fiber

✓ Cisco FEX ports do not support connectivity to any Layer 2 switch which generate spanning-tree BPDU packets. A Cisco FEX port set by default the port in err disable status in case that receives a BPDU packet

✓ Each parent Nexus switch can support a maximum number of Cisco FEX and this value is based on the model of the parent switch.

✓ Cisco Fabric Extender uplinks toward the parent switch can be configured as port channel connections in order to offer high availability and load sharing. 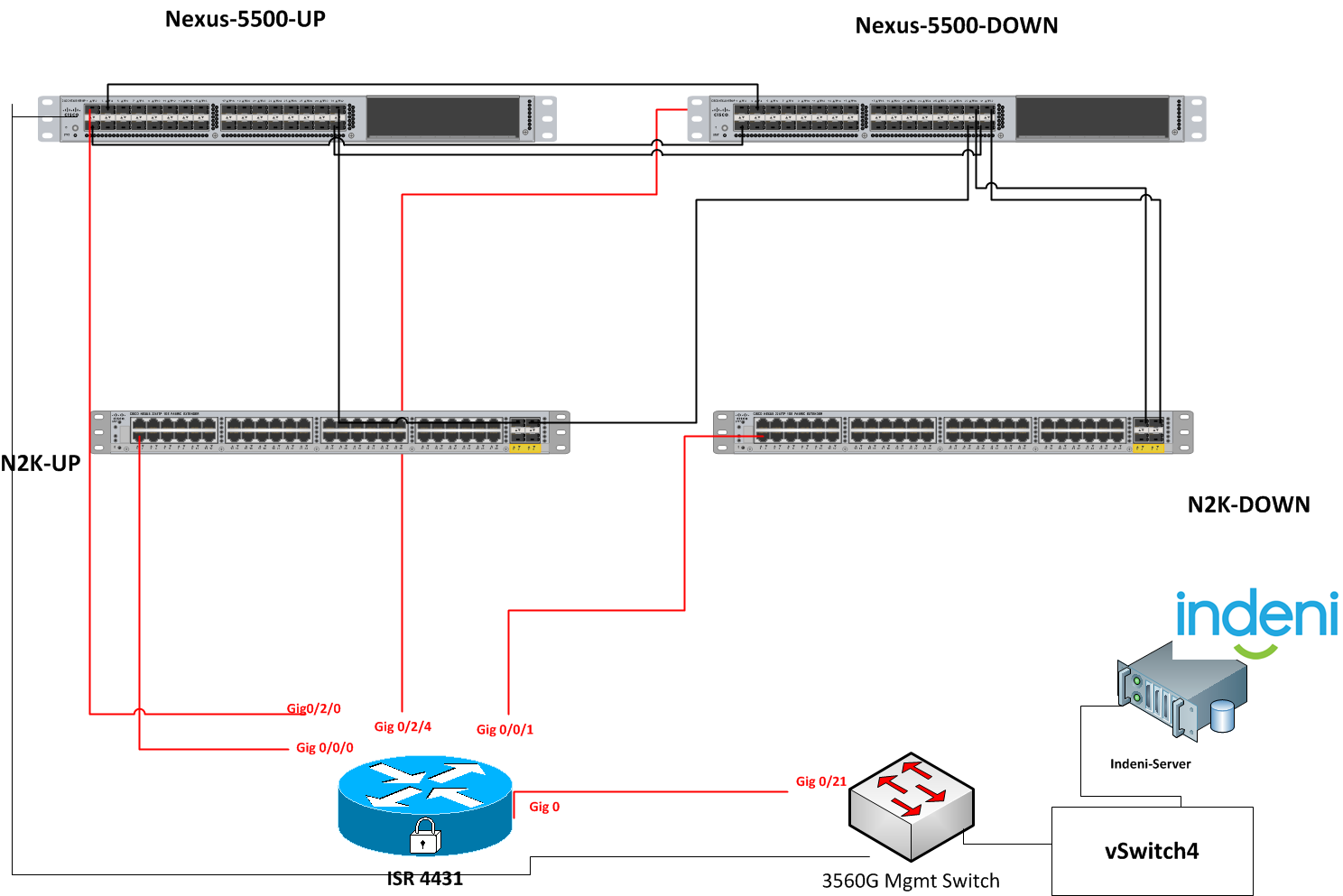 The software versions information of the Network devices and Indeni equipped to the lab can be found in the following table.

Finally, a brief description for the used Cisco Nexus switches for deploying the FEX technology and testing the Indeni vPC analysis capabilities is provided below.

Nexus 5548UP: A powerful and widely deployed Nexus switch commonly used as “End of Row” at a Data Center with thirty-two fixed Unified ports 1/10 Gbps fixed SFP+ on the base chassis along with one expansion slot.

The “show fex” and “show fex detail” NX-OS command are executed at the Nexus 5k switch deployed at the lab to check the FEX connectivity status, Model, S/N, Uplinks type etc. The output of this NX-OS command proves that the FEX switches toward the N5k switches are operational without any issue (status: online).

Let’s continue! We are connecting to the Indeni server and review the discovered Nexus switches deployed at the lab. The dual Nexus 5k switches previously configured with the vPC and FEX technology have been successfully discovered.

We review the Indeni FEX analysis of one of the aforementioned Nexus 5k series switches. As is illustrated in the next capture, it is necessary initially to choose one of the discovered Nexus switch e.g. N5k-down and then to choose the “More Device Info” tab on the right side.

Indeni has completed the Fabrix Extender analysis which does not need in most of the cases more than a few minutes. We review the Indeni analysis by selecting the first tab of the FEX named “FEX Connectivity Status”. It is verified that the FEX connectivity “online” status between the vPC peers as was displayed also by running the relevant NX-OS command. 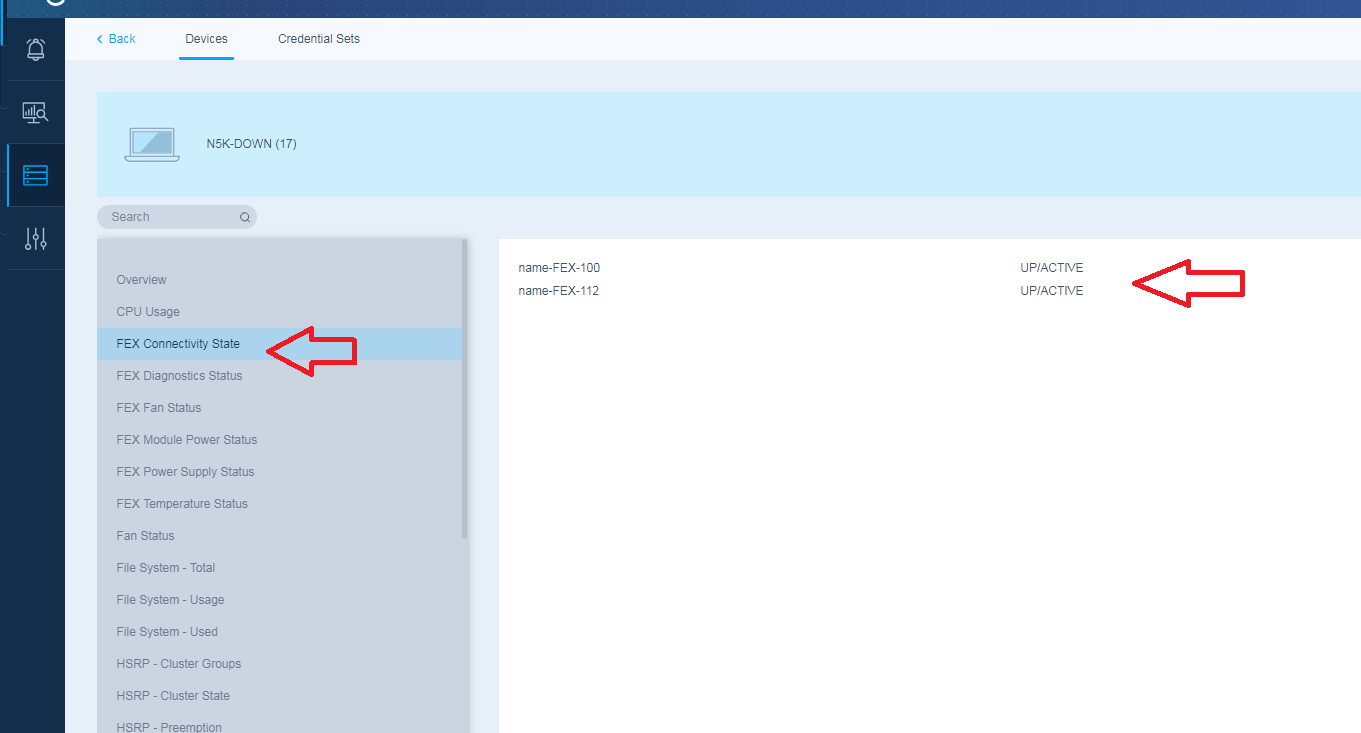 We are moving to the next tab named “FEX Diagnostic Status” which provides the results of the diagnostic tests of a Fabric Extender chassis collected by Indeni. The provided information includes metrics such as ASIC (application-specific integrated circuit) status, Temperature sensors, Power Supplies and SPROMs (Serial Programmable Read-only Memory) diagnostic tests results. The list of all the NX-OS diagnostic results analyzed by Indeni can be found in the next capture. 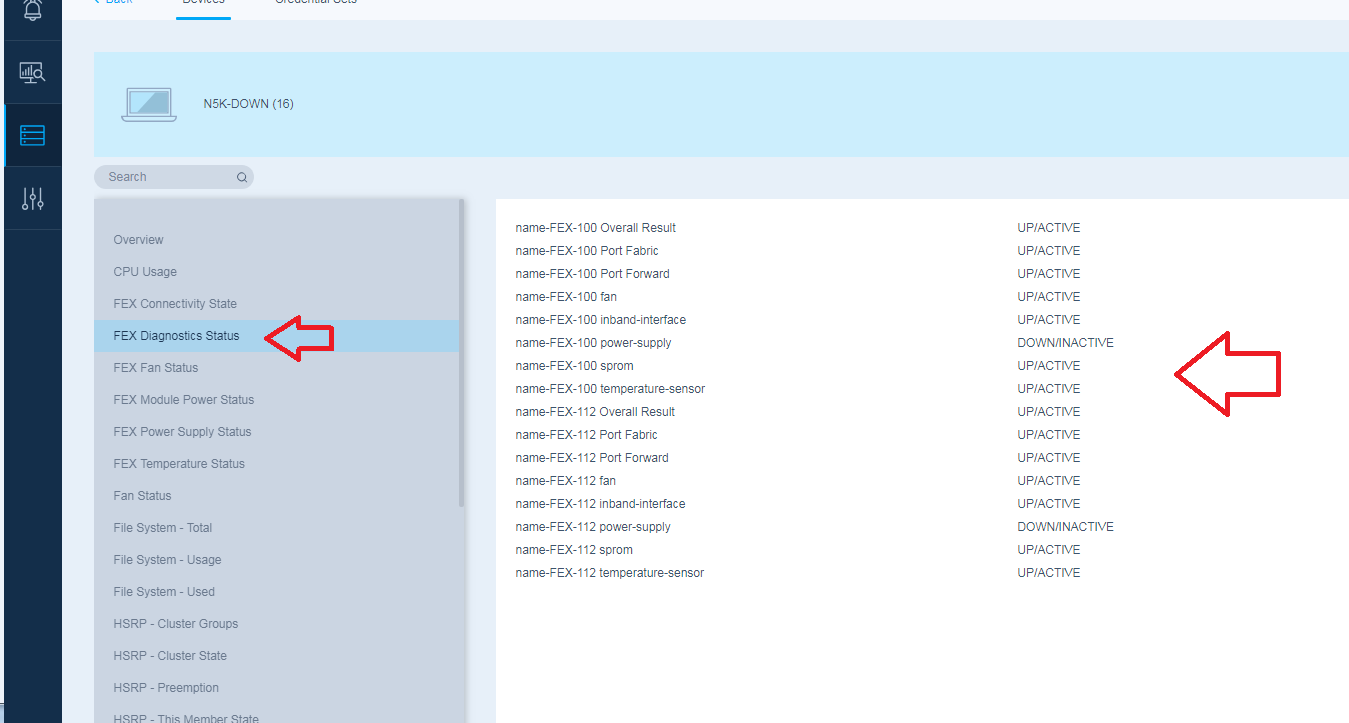 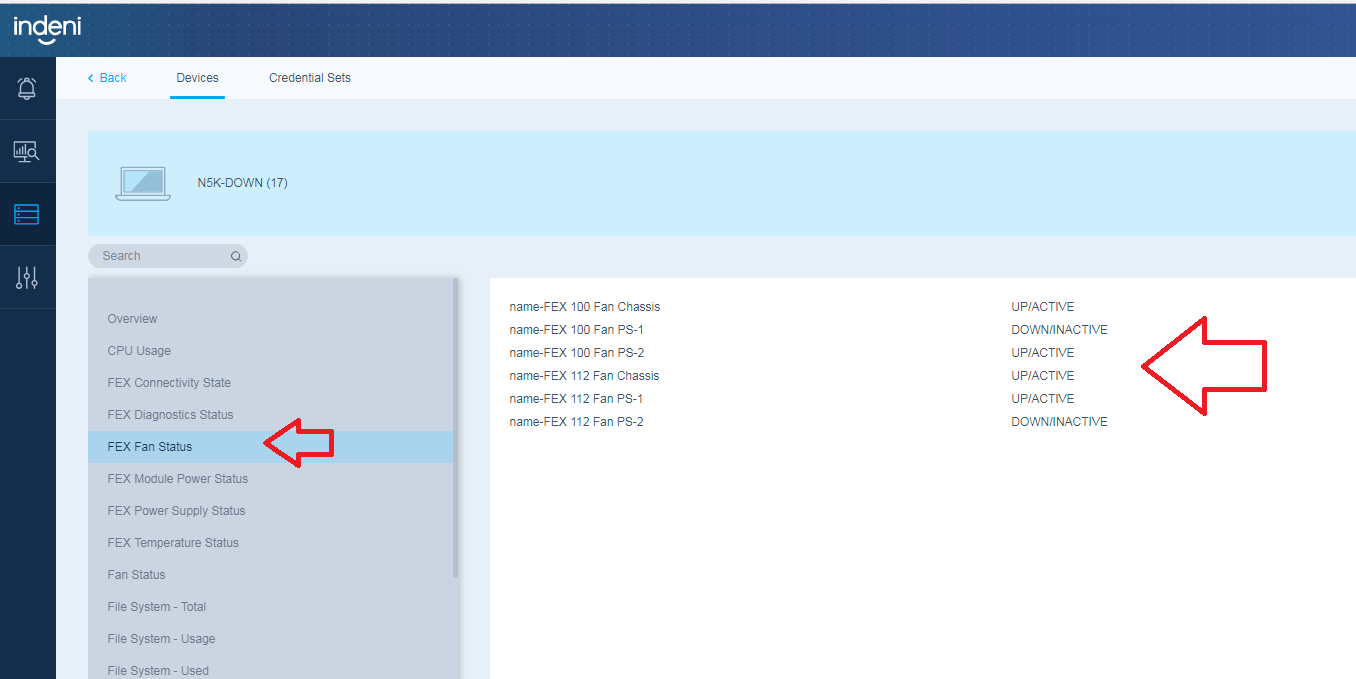 Let’s move to the Indeni Lab and see how Indeni responds in case of failure of the vPC connectivity status. The FEX uplink is set down to one of the N5k switches installed at the lab.

Indeni instantly reacts to this change, analyzes the relevant NX-OS outputs in the backend and triggers the next alert.

Let’s see the details of this alert raised by Indeni. 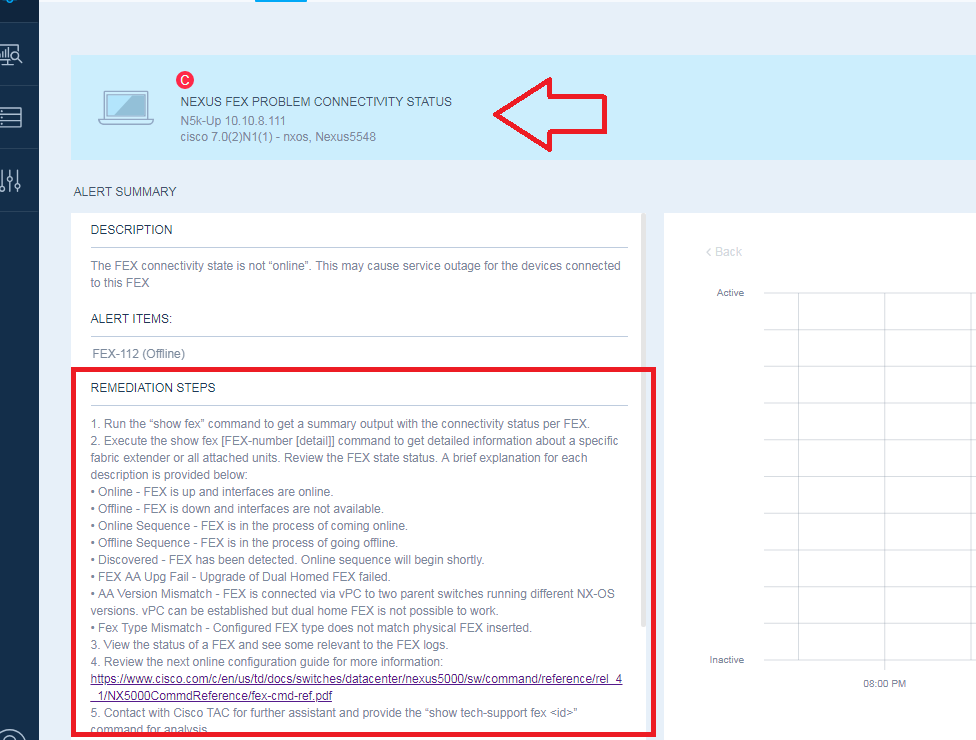 The next capture informs the Network Administrator that one of the FEX of the N5k switch has just been installed and is downloading the new NX-OS image from the parent switch. 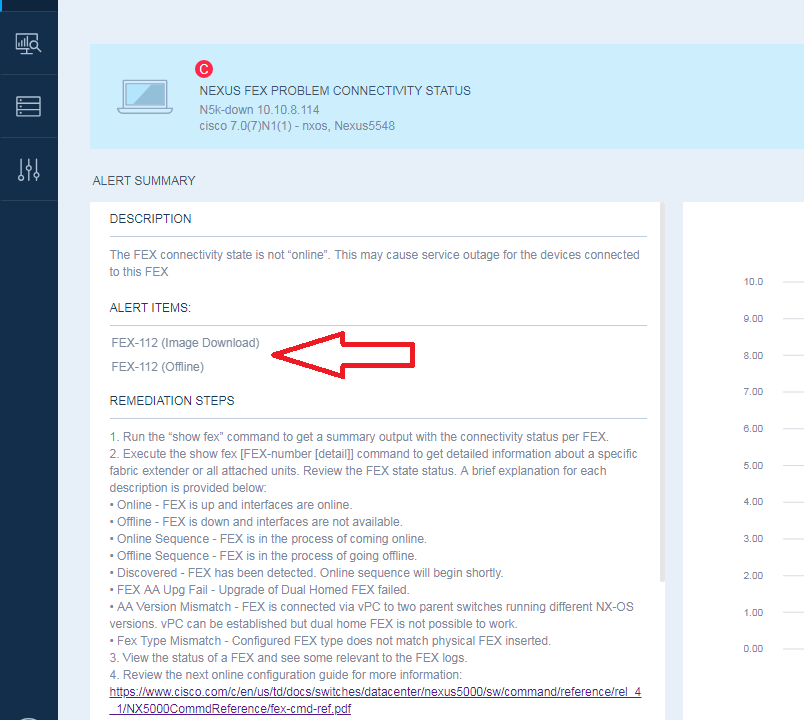 Finally, Indeni analyzes all of the FEX environmental metrics and provides information for all these metrics with remediation steps as is illustrated in the next capture. 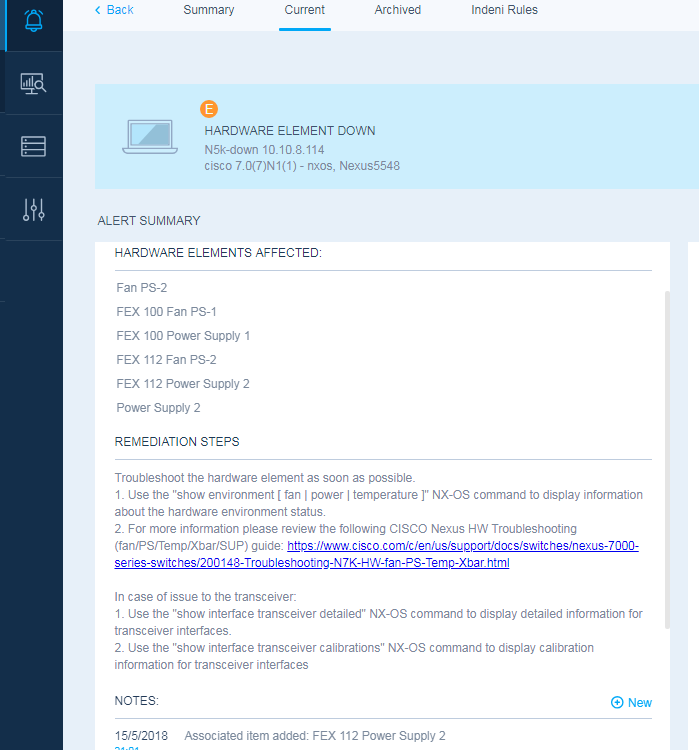 This article describes the main components and features of the Nexus Fabric Extender (FEX) Nexus technology. A pair of Nexus 5k and N2K-C2248TP-1GE switches are used at a lab environment by Indeni in order to get a dynamic report of the FEX activated features and status. In addition, it is described how to get access to the FEX Indeni Analysis tabs and captures are provided to describe the NX-OS FEX capabilities offered by Indeni via the Live Config tab. It is demonstrated how the Indeni platform continuously analyzes the relevant NX-OS outputs and triggers the relevant alerts including detailed remediation steps on how to check the status of the feature, how to apply it and finally a reference to the Cisco configuration guide or best practices design guide are provided.

This article is part of the Nexus & Indeni series of articles discussing the cool features and powerful capabilities that Indeni offers for the NX-OS FEX technology. More articles about Indeni and the Cisco Nexus technologies are coming soon. Stay tuned ☺

Indeni uses cookies to allow us to better understand how the site is used. By continuing to use this site, you consent to this policy.OkLearn More