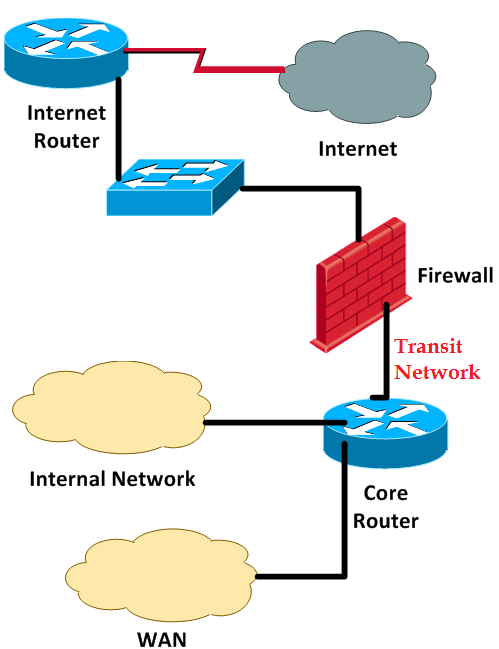 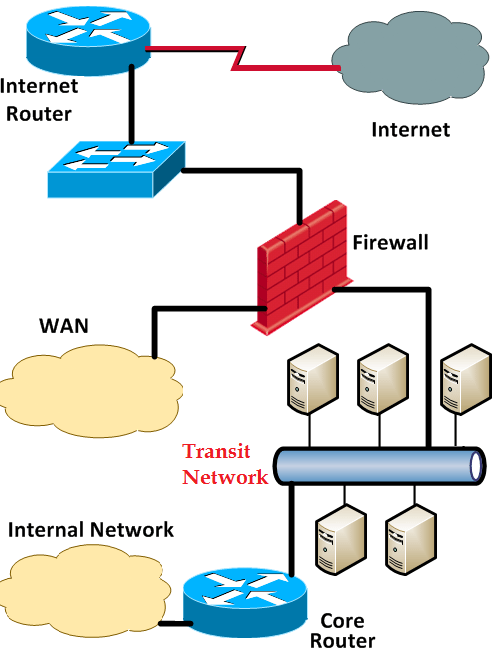 I may have some bad news for you; this latter network architecture is infamous for causing network performance issues. Ideally the VLAN between the firewall’s internal interface and your internal core router is simply used to transit traffic between the two entities. When there are other systems present on that transit VLAN, those systems have two possible gateways for routing and are in a kind of a “no man’s land” in regard to routing.;So what should those systems’ default gateway be? In most scenarios the default gateway is set to be the internal core router and things seem to work. However this setup will cause one of the following to occur:

Let me guide you through these two scenarios. The former is a minor issue while the latter can be a major issue from a performance perspective.

In the first scenario let’s suppose one of the no man’s land systems (a user workstation) between the firewall and the Internal core router needs to send traffic to a system located on the internal network. The destination IP is determined to be nonlocal, so the workstation sends the packet to its default route (the internal core router) in the forward direction (Stage 1). The packet is sent to the destination inside the network by the core router, and on the return path the core router sends the reply directly to the workstation (Stage 2). Everything was symmetric and handled properly; no problems here: 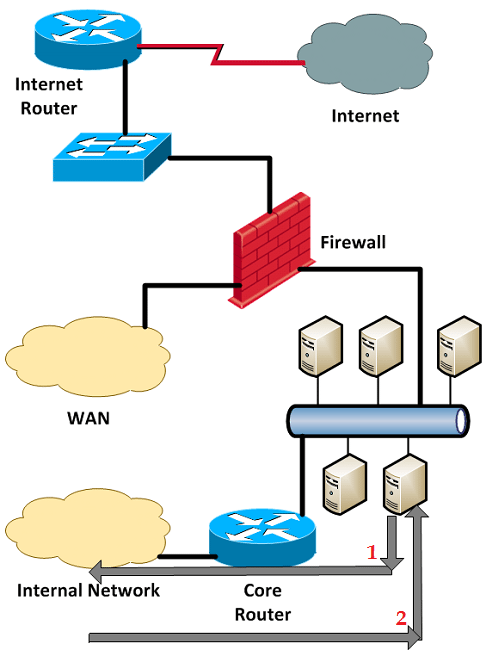 Now let’s suppose a system in no-man’s-land initiates a connection to the Internet: 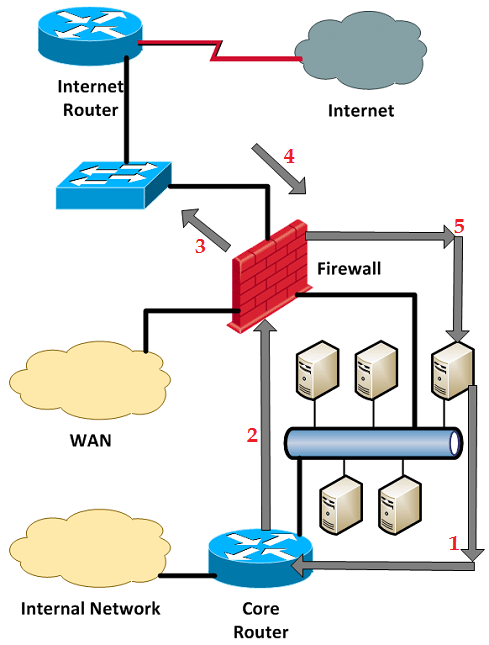 Figure 3‑7: Asymmetric Traffic Path to the Internet for Serve

Once again the destination IP is determined to be nonlocal, so the workstation sends the packet to its default gateway-the internal core router (Stage 1). Notice that the packet went towards the internal network and not towards the Internet, at least initially.Upon receipt let’s assume the core router is not configured to send ICMP redirects. In this case the core router will “hairpin” or “u turn” the packet right back out the same interface it was received towards the firewall (Stage 2). Let’s assume the firewall accepts the packet and forwards it to the Internet (Stage 3).;The reply returns to the firewall on its external interface (Stage 4). The firewall then sends it directly to the no-man’s-land system (Stage 5). Notice how the forward path and the return path were not completely identical, which is by definition asymmetric. From the firewall’s enforcement perspective the connection was symmetric, since the traffic crossed the same firewall internal interface on both the forward and return path.

Normally this situation will not cause a dramatic performance issue, but in general it is desirable to avoid asymmetric pathing in a network. As an example of why, let’s suppose the Internal core router is overloaded due to numerous backups running between several different VLANs on the internal networks. A user on the no man’s land workstation initiates an FTP to the Internet and GETs a large file. The main flow of traffic (and largest packets) in this case is in the return direction from the Internet to the workstation and the core router is not involved with routing this heavy traffic. There is a stream of ACKs being sent by the system through the core router, back to the firewall and to the Internet in the forward direction, but these are small infrequent packets that are not dramatically impacted. In this case the user sees very good file transfer performance and is not directly impacted by the heavy load on the core router.

However in the same FTP connection session the user attempts a file PUT operation.Now the heaviest flow of traffic is in the forward direction from the user’s workstation to the Internet, which must flow through the overloaded core router and back through the firewall. The user now sees ridiculously bad file transfer performance due to the overloaded core router losing and/or inordinately delaying the heavy flow of traffic. This is a textbook example of why it is desirable to avoid asymmetric pathing in the network; it can cause strange, inconsistent performance issues such as these.

The second possibility in our Dual Default Gateway discussion is far less obvious and will almost certainly cause intermittent performance issues and even brief outages in some extreme cases. Let’s step through it. 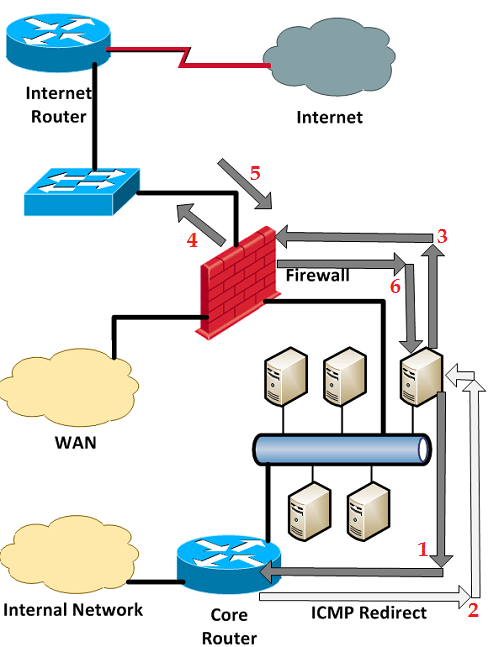 The workstation in question initiates a connection to a system on the Internet. Let’s suppose the destination IP address is 129.82.102.32. Once again the destination IP is determined to be nonlocal, so the system sends the packet to its default gateway the core router (Stage 1). Notice that the packet went towards the internal network and not towards the Internet, at least initially. Upon receipt let’s assume the core router is configured to send ICMP Redirects. Upon consulting its routing table, the core router notices that the workstation sent the packet to the “wrong” default gateway. If the core router is configured to issue ICMP redirects it forwards the packet to the firewall AND sends a special ICMP message called a redirect (ICMP Type 5) to the workstation basically saying “hey you went the wrong way, instead of using me as the gateway for this destination host address send it to the firewall instead” (Stage 2). Upon receipt of this special ICMP packet, the workstation dynamically adds a temporary static, host based route to its routing table for address 129.82.102.32 with its next hop being the firewall internal interface address. All future packets to 129.82.102.32 are now sent directly to the firewall (Stage 3), thus assuring network path symmetry. Now FTP performance to this Internet destination from the workstation will be completely unaffected by the performance state of the internal core router.

This sounds great, but danger lurks.There are many things that can go wrong here and all of them will impact the network performance of the user’s workstation. First off, how do we know if this situation is present in our network? On the user’s workstation, initiate some traffic to a few Internet sites, then run a netstat -s command and under the ICMP section look for a counter called “Redirects”. If it is nonzero and increments every time a unique Internet site is visited, the situation discussed is present and you should not rely on this mechanism for a properly functioning network.

However this situation may be present in your network but everything seems to be working just fine! You are lucky, but eventually you will have this hurt you at some point; it is not a question of if but when. Why? Here is a sampling of a few things that can go wrong:

It is risky from a performance perspective to have a Dual Default Gateway scenario as has been described here and it may be impacting your network’s performance right now without you even being aware of it. Unless you want to start hard coding static routes on all workstations located in no-man’s-land, you’ll need to create an isolated VLAN solely for transit between the internal core router and the firewall as follows:

Timothy Hall is the author of Max Power: Check Point Firewall Performance Optimization. He is an Information Security Professional with over 20 years of experience, and has worked with Check Point firewall products since 1997. If you want to contribute as well, click here.