Cisco NX-OS offers a robust set of features to guarantee the uninterrupted operation of the Nexus series switches at the Data Centers. Taking advantage of the Cisco NX-OS architecture which is running on Linux OS, makes it easy to embed productive tools used by network administrators who are familiar with Linux-based environments. Two of the tools Cisco offers with the NX-OS are the Ethanalyzer and tcpdump. The Network administrators no longer have difficulty gaining visibility of the nature of the traffic flowing through their network.

This article is part of the vPC Nexus-Indeni series. It starts with a review of the embedded to NX-OS Linux based packet captures tools. It follows a brief introduction to the Wireshark application and describes the Wireshark-like functions provided by Cisco NX-OS. Then, we discuss how to use the Wireshark protocol analyzer for real-time analysis of traffic. Finally, it is demonstrated in the lab environment how can easily we can exploit the credentials of a user who logged in via telnet to a Nexus switch by taking advantage only of the NX-OS packet capture tools and the Wireshark. Lastly, this article highlights how Indeni’s analysis can eliminate network security risk and resolve the problem.

The Ethanalyzer is a tool mainly used to troubleshoot control plane and traffic destined to switch CPU.

The Cisco NX-OS Ethanalyzer has the next main features and limitations:

Tcpdump is an NX-OS CLI application that can be used to capture and prints out a description of the contents of packets on a network interface. It supports several command options and features such as the -w flag, which causes it to save the packet data to a file for later analysis, and the -r flag which causes it to read from a saved packet file rather than to read packets from a network interface. In all cases, only packets that match expression will be processed by tcpdump. Finally, the tcpdump tool is not supported by all the Nexus series switches.

This section describes the Cisco Nexus switches, Indeni platform and Software versions deployed at the lab environment to test the NX-OS ethanalyzer and tcpdump packet analyzer tools. Then, the captures are collected and analyzed in the Wireshark to exploit the credentials and track the activity of the user.

The following network diagram illustrates the Network topology as well as the private IP address allocation of the remote user, TFTP server and the Indeni platform. 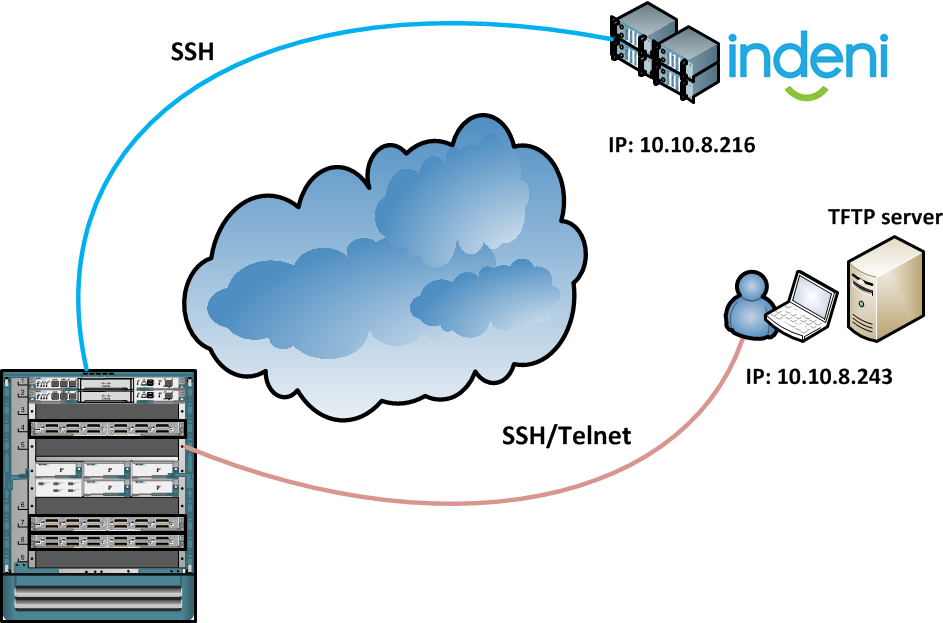 The software-version information of the Network devices and Indeni equipped to the lab are found in the following table. 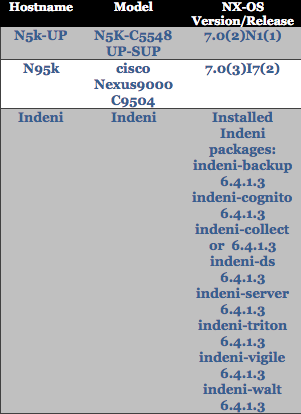 The following chart provides an easy mnemonic in order to elaborate the numbering convention of the deployed NX-OS versions.

Here’s a brief description of the used Cisco Nexus switches:

Nexus 5548UP: A powerful and widely deployed Nexus switch commonly used as “End of Row” at a Data Center with thirty-two fixed Unified ports 1/10 Gbps fixed SFP+ on the base chassis along with one expansion slot. In addition to the fixed interfaces, the Nexus 5548UP has one expansion module.

The new user is configured to the NX-OS and all the users are displayed to the output.

First, we login through SSH to the Nexus 5k in order to set a traffic capture by taking advantage of the Ethanalyzer NX-OS command.

Now, the ethanalyzer is activated to monitor all the traffic toward the mgmt port and for port 23 (telnet).  The capture file is saved to the bootflash of the Nexus.

The ‘capture-filter’ option is used to select which packets to display or save to bootflash during the capture. The capture-filter option has the same syntax, and thus the flexibility, of the Linux tcpdump utility.  The limit-captured-frames command option is set to 100 and refers to the maximum value for the number of frames to be captured (the default is equal to 10 frames). To sum up, the Ethanalyzer by running this command shows the 100 packets which match the filter “tcp port 23” capturing only the telnet traffic toward the management interface.

As soon as the telnet session is established the NX-OS capture starts to collect frames and save to the predefined bootflash. Meanwhile a brief sequence of the packets is illustrated to the NX-OS terminal.

The capture reaches the maximum defined value of the 100 frames and stops. The new file has been created and can be found in the bootflash.

Trying to read the capture file by running the “show file” NX-OS command proves that the format of the file is not readable.

However, NX-OS support embedded reader to view the captured frames directly from the terminal.

The details of each collected frame can be provided to the NX-OS output by adding the detail option to the last command.

As mentioned in the previous section, the tcpdump linux NX-OS tool is another option for packet capturing and is not offered by all the Nexus series switches. So, a  Nexus 9k series switches which supports this tool is used to test it. Seen below, the linux tool can be executed from the bash-shell of the Nexus 9k switch.

By following the command instructions and options we run as root (sudo) a packet capture this time by taking advantage of the tcpdump tool.

The file has been successfully uploaded to the TFTP server as is illustrated to the next capture. 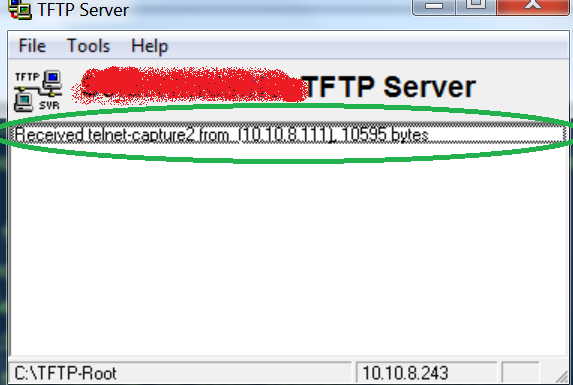 Then we change the extension of the collected file to .pcap and we open it by using the Wireshark application. All the frames are displayed. Then, we select the “Analyze” Menu and the “TCP stream” option as is illustrated below. 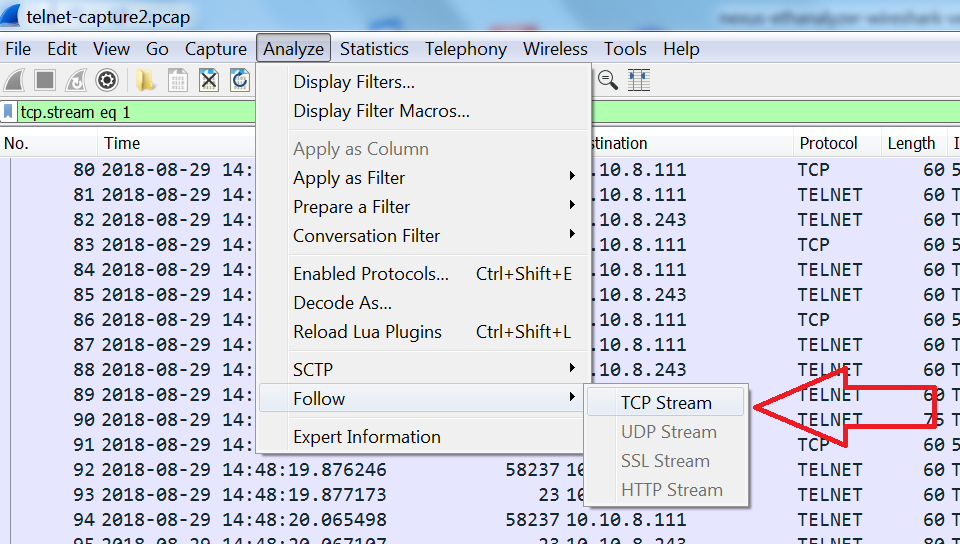 The output reveals the credentials of the user. It is so simple! 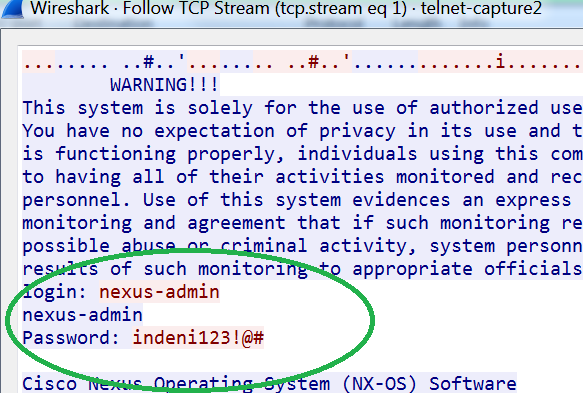 In addition, all the NX-OS commands and outputs executed by this user have been captured and provided from the capture analysis. Below is the execution of the “show ver” NX-OS command. 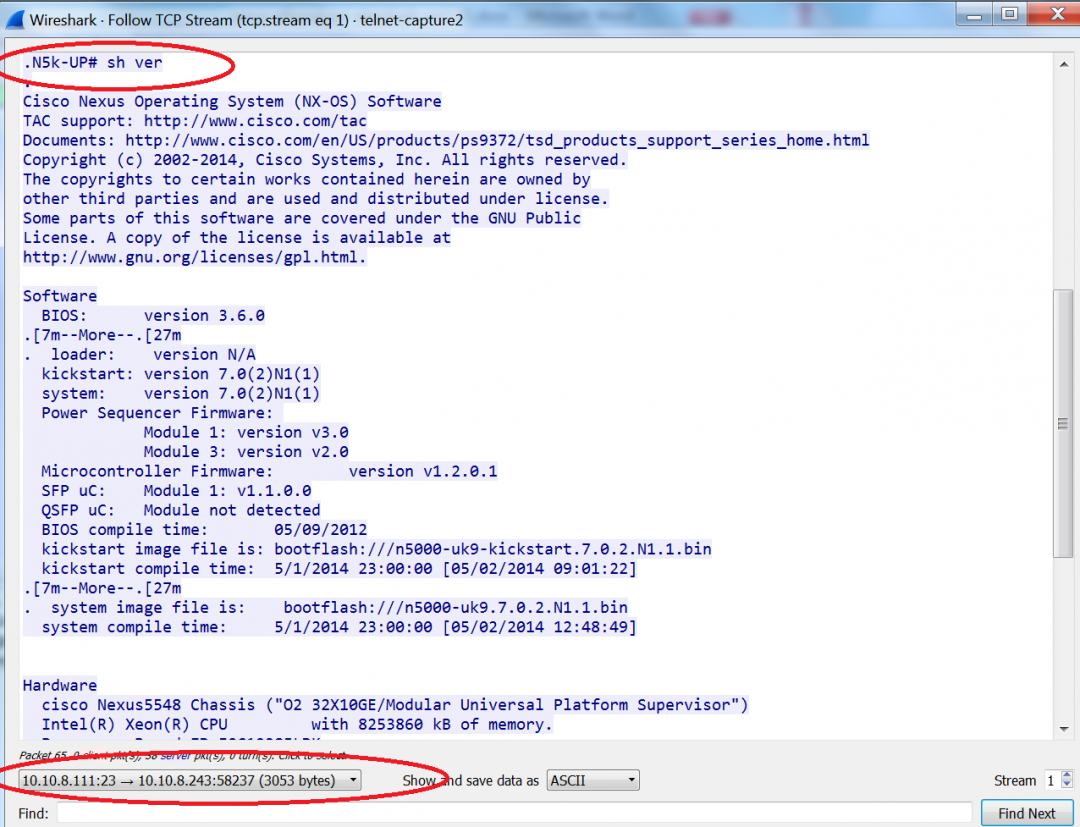 The packet analysis of the capture file from the Nexus revealed the credentials of the user, the executed commands and the relevant outputs of each command by executing only few steps in the Wireshark.

Indeni monitors and analyzes metrics related to the telnet service to eliminate the embedded to the protocol security risks as highlighted to the previous section.

The live config tab of the Indeni provides useful information about the users and telnet service status of the Nexus switch as is displayed below.

Indeni raises an alert when identifies that the Telnet service is enabled to the Nexus switch. Remediation steps are provided how to resolve this issue. 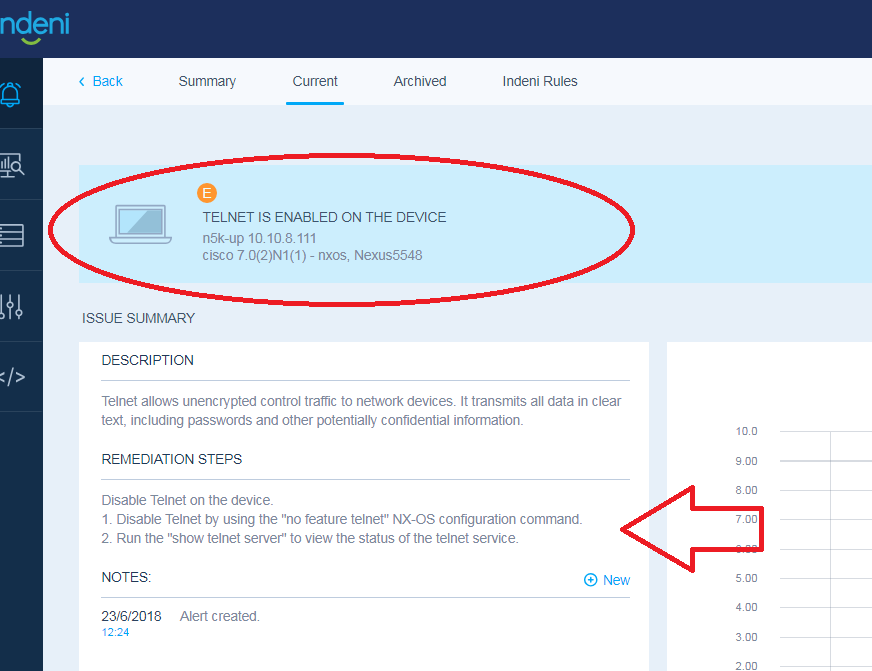 As soon as we connect to this switch to troubleshoot, we then validate that the telnet service is enabled by running the next NX-OS command:

Finally, we follow the remediation steps provided by  Indeni and we disable the telnet feature to the Nexus switch.

Indeni live-config is updated and the alarm is cleared. The nexus switch is no longer affected by the embedded vulnerabilities of the telnet protocol.

This article describes the packet-analysis tools embedded in the Cisco NX-OS. The capabilities and limitations of the NX-OS packet capture tools are described before being tested in the Lab.  The steps to configure the ethanalyzer and tcpdump are described and implemented at the Lab environment. Testing and verification commands proves the fully operation of the tools. In addition, we demonstrate how we can easily exploit the credentials of a user who logged in via telnet to a nexus switch and track his activity by using the Wireshark packet analysis tool. Finally, we how the Indeni analyzes the Nexus switch to get info about this vulnerability and how we can protect the Nexus switch by simply following the Indeni Remediation steps.