In my conversations with firewall users I often hear references to the “battle of the titans” between Check Point and Palo Alto Networks. Both are leaders in the Gartner Magic Quadrant, their security technologies are often compared and the marketing slander has been seen often in all the different mediums.

As everyone is aware, PANW’s aggressive growth outpaces the growth of the firewall market. This means that a large portion of the growth is coming from the displacement of their competitors. A point PANW’s CEO, Mark McLaughlin, made recently.

However, very little attention has been given to this: 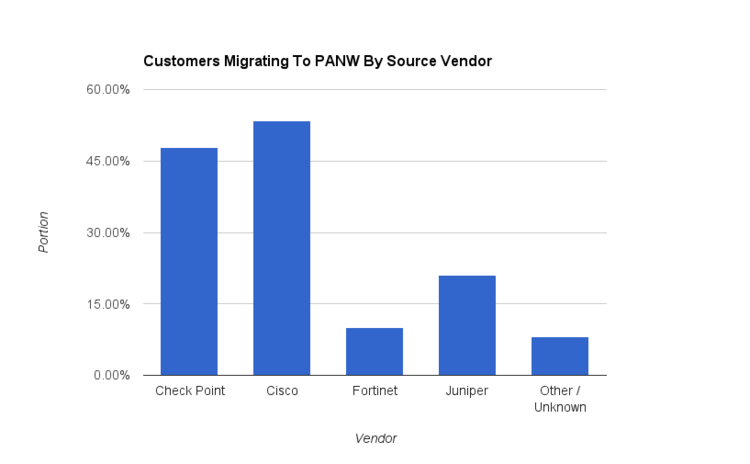 The sum of the percentages is greater than 100% as some customers migrated from multiple vendors to PANW.

We’ve surveyed 161 Palo Alto Networks Firewall customers based in North America and asked them what they migrated off of when they bought their PANW firewalls. 53% of them had Cisco ASAs, 48% had Check Point, 21% had Juniper, 10% had Fortinet and 8% had other firewalls or the surveyed individual did not know.

So, apparently, Cisco ASAs are the technology most displaced by Palo Alto Networks firewalls. Most people discussing Palo Alto Networks in the market are not aware of that fact. They are overly focused on Check Point because of the visible confrontation between the two companies.

In response to this, Cisco has recently announced their FirePOWER technology. It will be interesting to see if this new technology will help reduce Cisco ASAs’ portion in the chart above when we run this survey the next time. Anyone care to attempt and predict how the next time will look like?