Before finalizing any major platform decision it is well known that extensive research must be conducted. This post highlights the process we went through before selecting Apache Kafka as our next data communication platform. We will guide you through our motivation, main data entity and requirements, which communication platforms we researched, and their differences.

A little background about Indeni’s platform to set context on our evaluation:

Our services query the devices for data, parse it to a set of metrics for later to compare it against predefined thresholds and other fetched data.

A device metric is composed of a set of key value pairs called “tags”, a single value representing the data point (mainly double) and a timestamp.

Note: Of course we have more data entities flowing between our services such as device information and alerts, however, in much lower volume.

Indeni’s platform scale is measured on two axis, Horizontal – the amount of network devices being monitored by our platform, Vertical – the knowledge i.e.data collection scripts we are executing per device and the set of metrics generated by them.

As for today we are collecting roughly about: 500 Million metrics a day.

Until now we have used REST API to pass all our data between our services as REST has a lot of advantages such as: scalable in form of adding new endpoints and versions, idiomatic in operations (GET, POST, PUT, DELETE, etc) and resource URI, well known, easy to debug, no additional deployment complexities HW costs, the list goes on..

However REST has disadvantage where data need to be partitioned as services scaled out, message buffering is needed in some cases when incoming requests experience high peaks, data duplication in case more than one service consumes the same data, as well as losing requests in case of increased network latency or partitioning between services.

Our main requirements for the next communication platform:

Apart from being able to support our increasing scale in data we would like the following requirements from a communication platform:

Which platforms we tested:

RabbitMQ is a distributed message queue system which offers great flexibility in messages routing and delivery guarantees per single message, in addition queues can be spread and replicated across multiple nodes within a cluster for fault tolerance and high availability.

Base unit of work:

What does RabbitMQ not offer:

Apache Kafka is a scalable messaging system, designed as a distributed commit log which offers strong durability, low latency, data sharing and replication out of the box.

Base unit of work: 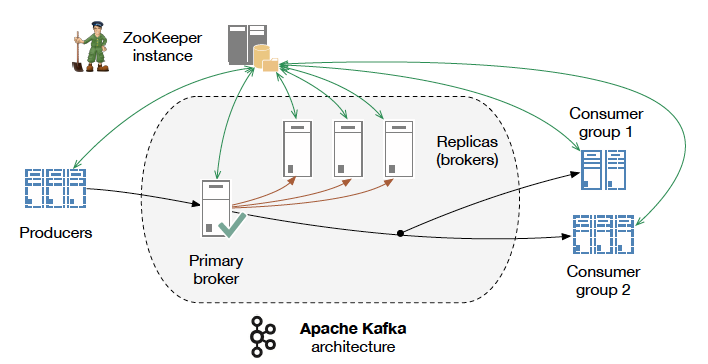 Why we chose Kafka:

As we can see from the analysis above both RabbitMQ and Kafka answer most of our requirements for scalability and reliability, however we have decided to go with Kafka since:

I hope you found this post helpful. For those interested in working with technologies like Kafka, we are hiring for backend developers. Check out Indeni Careers and apply today.