This article is part of the series of vPC Nexus-Indeni articles. This blog reviews the benefits introduced by this new feature introduced to NX-OS. The OSPF routing protocol over vPC is configured and tested in a lab environment. We will discuss the configurations, implementation and verification steps in detail.

Before the introduction of the Layer 3 routing over vPCA a Network Architect had the following routing options:

By taking advantage of the new Layer3 Routing over vPC design, a Layer 3 device can form peering adjacency between both the vPC peers in a vPC setup. Routing adjacency is now formed without Layer 3 inter-switch links between the vPC peers but over the vPC peer-link. Take the following prerequisites into consideration:

The embedded vPC loop avoidance mechanism is still available for all traffic, but now the TTL of the traffic sent over a peer link is not decremented. The benefits of Dynamic Routing over vPC feature are summarized below:

The following table summarizes the NX-OS versions and the Routing Protocols Adjacencies supported over vPC VLANs. 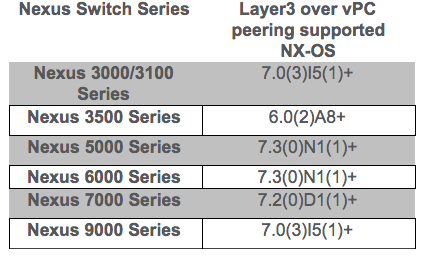 More details with the supported Network Topologies and NX-OS versions can be found to the next link published by Cisco:

The following section depicts the Cisco Nexus switches and Software versions deployed at the lab environment in order to configure and test the Routing over vPC feature. The deployed CISCO Nexus lab physical topology is illustrated in the next diagram. 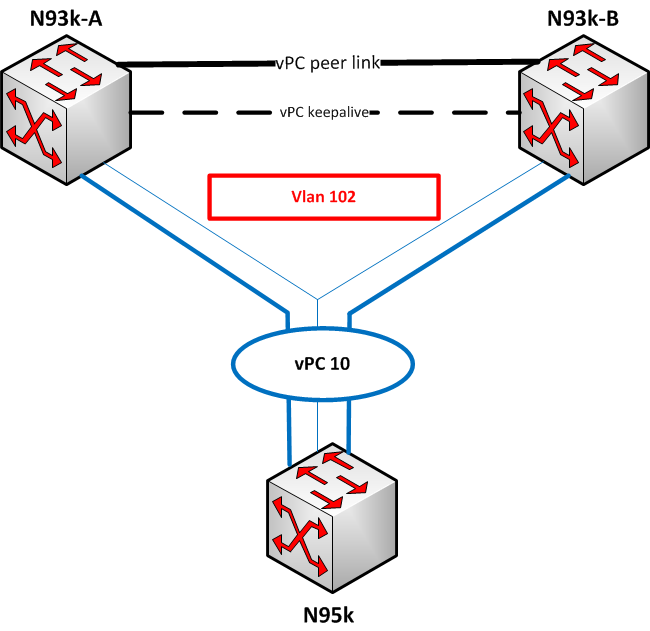 The hostnames, models and software versions information of the Network devices to the lab can be found to the following table: 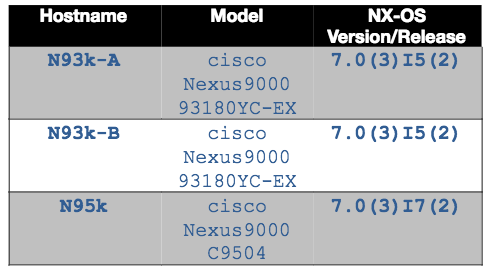 The following figure provides an easy mnemonic to elaborate the numbering convention of the deployed NX-OS versions.

Here’s a brief description for the used Cisco Nexus switches for deploying and testing the vPC technology:

The pair of Nexus 93180YC-EX is configured with vPC and the Layer3 routing over vPC is activated. Then the OSPF routing protocol is activated between the vPC peers 93180YC-EX and the vPC edge device Nexus 9504. The Layer 3 topology is illustrated to the next network diagram. 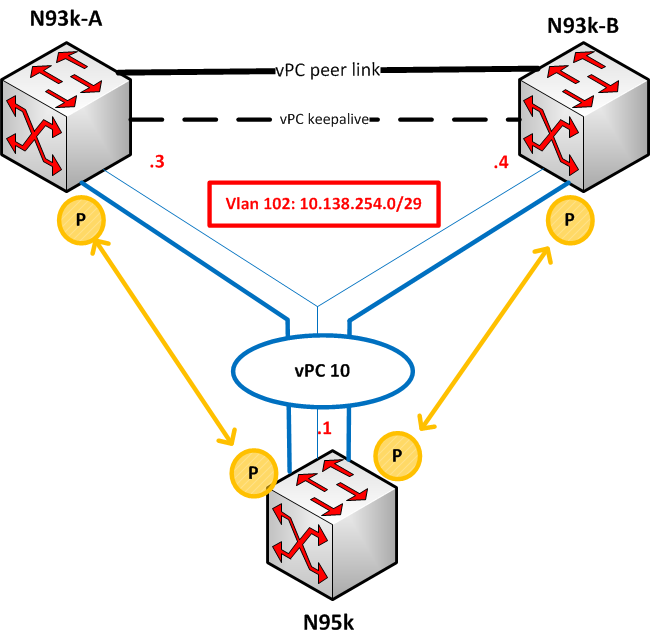 The vPC peer configuration is applied to the pair of the Nexus 93180YC-EX switches. Details about how to configure and verify the operation of the vPC can be found in the Nexus and Indeni series:

Initially, we validate that both Nexus peer switches run an image that supports the Layer 3 over vPC feature and that the vPC basic setup is operational. Then, to activate the Layer 3 routing over vPC featue the peer-gateway feature is enabled and configured on both the peers.

The layer 3 routing over vPC is enabled by running the NX-OS command “layer3 peer-router” in the vpc domain to both vPC peers.

Note-2: If you configure the “layer3 peer-router”  command only on one of the peers or you disable it on one peer, the operational state of layer 3 peer-router gets disabled.

Here’s the relevant configuration from both vPC peers:

The show vpc brief command is executed at the Nexus 93k-A switch deployed at the lab to check the vPC domain ID, the peer-link status, the keepalive message status, whether the configuration consistency is successful, and if a peer link has formed. It also states the status of the vPC Port Channels. The output of this NX-OS command proves that the l3 routing and the peer-gateway features have been activated over the vPC.

The OSPFv2 is configured across the previously configured vPC pair of the Nexus N93k and the N95k. The next table illustrates the IP addressing scheme used for the Routing over the vPC.

The OSPFv2 is an IETF link-state protocol for IPv4 networks. It has the following main prerequisites, limitations and guidelines for Nexus switches:

The OSPFv2 router identifier is configured by assigning it IP address of the loopback. This IP address identifies the OSPFv2 instance and must exist on a configured interface in the system. Below are the relevant OSPF configurations for all the Nexus switches:

The OSPF configuration passive-interface default command is used to suppress routing updates on all interfaces except of the interfaces that are manually configured. Finally, all networks have been configured to the default backbone area (Area 0). The Area ID is a 32-bit value that you can enter as a number or in dotted decimal notation, such as 10.10.10.1. Cisco NX-OS always displays the area in dotted decimal notation.

The OSPF area network type is set to broadcast. OSPFv2  As is illustrated above the Nexus switches establish a DR and BDR that controls LSA flooding on the network. OSPFv2 uses the well-known IPv4 multicast addresses 224.0.0.5 and a MAC address of 0100.5300.0005 to communicate with neighbors. All other nexus switches establish adjacency with the DR and the BDR and use the IPv4 multicast address 224.0.0.6 to send LSA updates to the DR and BDR.

Finally, the routing table below illustrates the received OSPF routes of the N95k Nexus switch. The ECMP (equal routes) works as expected and each route has two next hops toward to each of the Nexus N93k vPC peer switches.

The routing table from a Nexus vPC peer switch N93k switch is below is where all the OSPF routes learnt via the N95k have a single next hop which is the IP address of the N95k.

Indeni currently analyzes several important metric related to the OSPF routing over vPC feature like these described below:

This article describes the Layer 3 Routing feature recently introduced to Cisco NX-OS. The main advantages of this feature are described before be tested at the Lab.  The steps to configure OSPF over vPC are described and implemented to the Nexus Lab environment. Testing and verification commands proves the fully operation of this feature.  Finally, it is mentioned how the Indeni analyzes and get insight of the Routing over vPC feature.

This article is part of a Series of articles which highlight cool NX-OS features and powerful analysis capabilities that Indeni offers for the Nexus switches. More articles for Cisco Nexus and Indeni are coming soon.  Stay tuned ☺