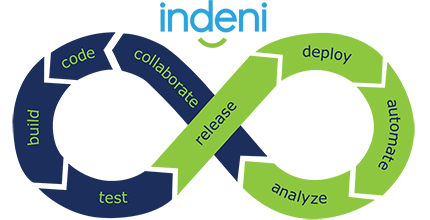 This is an excerpt of the Indeni How it Works Whitepaper. Read more by downloading here.

For the last decade the server industry has leveraged automation to increase the productivity of their teams. In fact DevOps has become the industry standard for how Server Operations meets business needs, “DevOps is an understood set of practices and cultural values that has been proven to help organizations of all sizes improve their software release cycles, software quality, security, and ability to get rapid feedback on product development.”

In a normal DevOps model, there is an infinitely iterative process of building, deploying, using, changing and building again. The idea is to start with something and then keep expanding and modifying based on how it performs in production. When you apply these principles of scalable and sustainable automation to the network and security world, we realized we could apply this model at a global level.

Imagine what would happen if you could get all of the network engineers around the world to build, deploy, use, change and build again. Together, they could build the ultimate solution to the network operations challenge – they could automate nearly all of the mundane, time-intensive and error-prone tasks involved with networks today. That’s quite a vision, but how do you achieve it? With Indeni.

How to Enable IT Operations to Build Automation

The automation scripts that are included out of the box with Indeni are written in a language called Indeni Knowledge Language (IKL). Why did use a new language instead of the those used in server automation platforms such as Ansible, Chef and Puppet? While these technology platforms are very successful, and similar to Indeni’s the automation scripts are crowd-sourced, they have two big challenges when they come to network and security devices:

The coding languages used by existing automation platforms are Ruby and Python. The languages normally target software developers and devops engineers, but are not a very good fit for the automation of network and security devices. Such devices need a language that is targeted at parsing data of a variety of formats and running commands that vary from product to product. For these reasons, we chose AWK as the underpinning of IKL. It was built for text processing and is easy to learn. We extended it to make it even easier to use.

The Indeni facilitates an open development process between developers and users of those products, or scripts. Co-development process is completed by developers inside the Indeni Crowd. The output of these virtual teams are the automation scripts, which are available as a turn key solution for time and resource strapped network and engineering teams.

How to Get started

Get up and running in minutes and automate the identification of issues across network and security infrastructure. Have complete visibility into the commands used and customize to your heart’s content.